On the way to St. Olav - from Oslo to Selånger 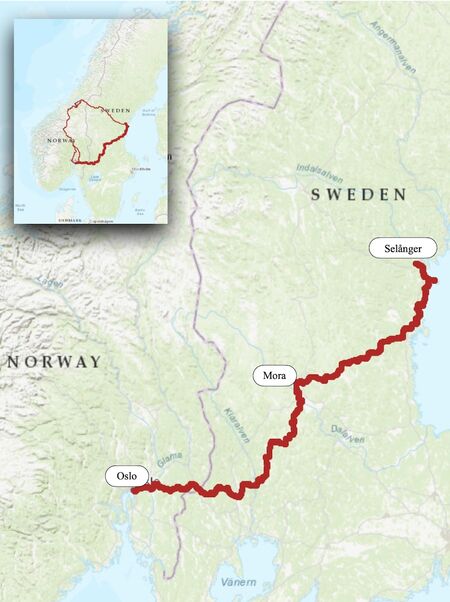 On the way to St. Olav is a route from Oslo to Selånger which connect both St. Olavs ways. The route has everything from Sweden: Forests, lakes, idyllic villages with red houses, A little bit of the East Coast, quiet and space.

At the moment that final touches are being worked on for the development of this route. The (Dutch) publication is expected to be in 2023.

The route is split in five segments:

Segment 1 Norway
(Oslo – Swedish/Norwegian border)
During this first part of the route, you first cycle many kilometres through the city of Oslo to Lillestrøm and then through the sloping Norwegian farmland. The closer you get to the Swedish border, the more wonders of nature you'll see.

An outstretched hill landscape with a lot of forests with lakes, shallow waters, ponds and rivers. You pass the towns Sunne and Hagfors. Three quarters of the route is made up of forests, and the number of lakes passes the 10,000. There's a big chance that you'll see deer, foxes, cranes and moose.

Segment 3 Dalarna
(Naren – Tungsen)
Rough mountain area with even more forests and lakes, clattering waterfalls and very quiet side roads. Dalarna (Dalarna means ‘the valleys’) is mainly known for it's brightly coloured wooden toy horses, dalahästar and the red houses. The red colour of the Swedish houses, Falunrood, originates here. On this segment you'll reach the highest point of the route at 450 meters.

(Tungsen – Armsjön)
Nature varies from archipelago, out stretched plains, meadows and deep forests. You arrive at the east coast of the Gulf of Bothnia, north of the Baltic Sea. You cycle through the coastal area Jungfrukusten with small picturesque fishermen villages.

Segment 5 Västernorrland
(Armsjön – Sundsvall)
Almost in Selånger, the starting point of the St. Olavs way. This area in Våsternorrland is called Medelpad which translates as middle path. Since medieval times, this area is called this way because the Pilgrims route starts here. Here you enter the first large city, Sundsvall.

Did you cycle this route and made wonderful pictures you want to share on this website? Then please contact us. Maybe they'll end up in the guide as well. Off course, only with your permission and credited with your name.