On the way to St. Olav - from Oslo to Selånger

On the way to St. Olav is not a hard route to cycle over. You climb a lot, but never steep. Apart from a fer mean point, the average ascent percentage is not so high. The hard part is the distance between accommodations and supermarkets, which can get significantly large. Some planning ahead is warranted. And then some other things:

All practical information at a glance:

De Dutch guide of this route is expected to be published in 2023.

In my view these are just 'numbers' used for indication and can differ in the real world. Depending on the source or app, the elevation can differentiate up to 10%.

For those who still like numbers, here's an overview. The source here is judise.nl, a gps-route editor which elevation numbers in Scandinavia are comparable to the popular Strava (for The Netherlands, Belgium and Nord-Rhein Westfalen the numbers of Judise are even more precise).

And then a personal note on these numbers: I know from experience that the numbers mean very little in practice. On a distance of 600 kilometres combined with a few hundred meters ascent doesn't tell me much. What is important to me is the ascent percentage. There is a big difference between climbing with 3% over a kilometre and climbing with 18% over a kilometre. And then there is this other thing: on any one given day you feel better or worse, depending on your mood, health, weather... In short, there are many aspects that make the experience of the route hard or easy to do. No number crunching can tell you that.

Keep in mind that some campsites and attractions don't open until half of June/end of June and start to close as early as half September / end of September. Sometime at the end of August. So make sure to check the appropriate website. 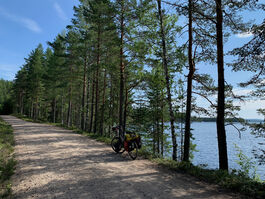 Road surface quality on the bicycle route is reasonable. The larger roads tend to be of better quality. You'll both encounter asphalt and gravel road

In general, you cycle over quiet country roads. Sometimes you won't meet a soul for kilometres on end. On the other hand, there are road you have to share with motorists and that is not always pleasant. Unfortunately, there are no alternatives found to get around that without a significant detour.

Some form of planning is needed when doing groceries. In larger towns there are restaurants. For a cup of coffee or tea, you regularly encounter a hemsbyggård in Sweden. 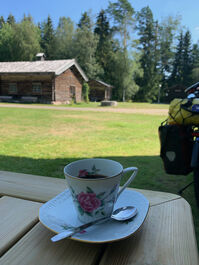 hembygdsgård is a Swedish term for a local history association or club. Often situated in a historical farm (gård). Many villages have such a small but cosy museum association or club that gathers and manages the local cultural heritage. Hembygdsgården is often used for celebrations like midsummer and Christmas, but also for weddings. In summer, there's always something to do. For cyclists, it is a perfect stop for a break. These spots are not only filled with cultural heritage, but they often serve fika, a cup of coffee with a range of homemade cake and cookies. This phenomenon is called a summer cafe. You can find such seasonal cafes on other places as well. In the - by volunteers run -  hembygdsgård, the atmosphere is almost always easy-going. There are even a couple of them where you can pitch your tent for a night. 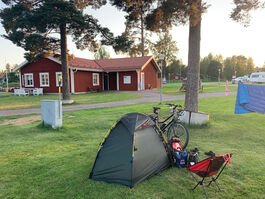 Cycling with a tent has some specific advantages in Sweden and Norway. Camping in the wild is allowed almost anywhere in the nature when you keep a distance of minimal 150 m from fences, and houses. On farms, you have to ask the farmer for permission. Along the route there are many campsites to find and for some you need to make a small detour. When you cycle with a tent, you have control over the length you cycle and even over your finances. Almost all camping have facilities for cooking, where you can not only cook, but also can eat warm and dry. If you want to cycle without a tent and still want to minimize your expenditures, you can find campsites with huts, cheap B&B and even cook your own food if a kitchen is available. For huts on campsites, you do need your own sleeping bag. If you're a member of Warm Showers, keep in mind that there are not many places to choose from.

Transportation to and from the route

There are many ways to get to and from Oslo. From Selånger (or the nearby town Sunsvall) you can't go home by bus or train if you bring your bicycle with you. This route is meant as a connection route for both Olavs Ways you'll most likely cycle from Selånger over The St. Olavs Way to Trondheim.

Some examples to get in Oslo:

Transportation to the ferry terminals
Depends on your personal preferences and available travel time. If you travel by train, you could try to book a trip with Fiets-mee.nl (Only in Dutch).

Train and bus in Norway

In Norway, the bicycle can come along in the train and in many cases also on the bus. Buy a ticket in advance on the website of VY(vy.no).

Please take note of the following:

Tip If you travel with a regional train, buy a flexible ticket for yourself on the website of VY, and buy the bicycle ticket in the train. Oslo is a manned station. There you can buy tickets at the counter.

Train and bus in Sweden

In Sweden, your bicycle can come with the bus. On certain lines, the bicycle can come along in the train. On this route, on the other hand, there's no possibility to hop on any form of public transport.  From Sundsvall, you can go by train to the west with your bicycle. Up to Duved, the line goes along the St. Olavs way. From Duved, the St. Olavs way goes to the north-west and the train to the west. In Duved, you can change to a Norwegian train.

As far as safety is concerned, Norway and Sweden are well suited to travel alone by bicycle. 'Civilization' in the shape of roads, houses and farms are never far off, and the various villages and towns are never that far apart.
For women cycling alone, there are no additional measures needed compared to anywhere else in life. Even better, Sweden and Norway are relative safe countries for women.
There is little criminal activity, but it is still wise to lock your bicycle.

Also in Norway, the e-bike is gaining popularity and this route can definitely be taken with an e-bike. With that, you'll have to consider the following:

In short: Some planning is in order. And even if it seems obvious at first glance, ask! They'll almost say 'yes' any time, unless it is not possible, but plugging in without asking is 'not done'.