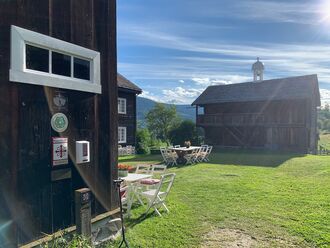 The oldest pelgrims hostel of the St. Olav’s Way

Sygard Grytting is a pilgrim accommodation, but not just any one…
It feels like stepping hundreds of years back in time, to be precise: to the 14th century. The old timber houses high up in the mountain side and the magnificent views of the Gudbrandsdalen Valley are like something out of a fairy tale. 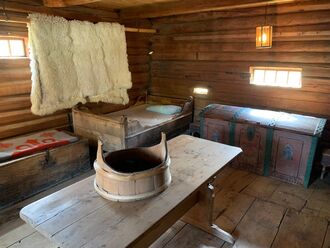 Rest after a long cyling day as the medieval pilgrim did and think about everything that has taken place here through seven hundred years. These are the only remaining remains of a medieval hostel between Vika (Oslo) and Nidaros (Trondheim), and for a pilgrim it is a "must" to spend the night here on ones way. 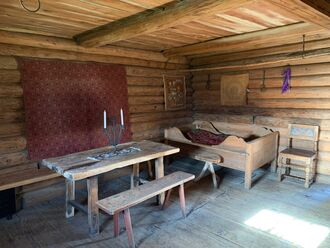 The medieval pilgrims’ attic, Langloft, is from before the Black Death (1349). It is the top floor of a separate barn where usually the maids or servants of the farm were sleeping, but it was also used as accommodation for pilgrims.
The building is constructed using a notching technique - with no nails - that was only in use before the time of the Black Death of 1350.
The fact that Sygard Grytting's attic has been preserved all this time and has now been refurbished as a rustic accommodation for pilgrims makes the link with the past particularly tangible! 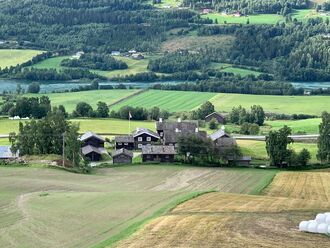 The name Grytting derives from the Old Norse “grojt-vin” which means stone meadow, and Sygard means southern. Based on location and archaeological evidence, this agricultural settlement is believed to be among the oldest in Gudbrandsdalen. Excavations have revealed long-houses from Roman times. Today’s farm comprises 25 log buildings dating from 1300 to 1860 and is unusually well preserved. 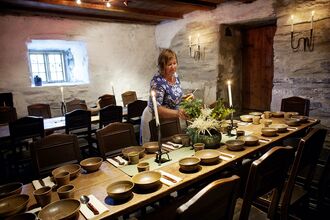 Not only the pilgrims accommodation, but also the family farm goes back to medieval times. The current owner, Stig Grytting, is the 17th generation living on the estate.
The family have occupied the land since 1300, which means that 300 years before the Pilgrim Fathers left England for the New World, Sygard Grytting was already hosting pilgrims on their way to Trondheim.
Stig and his wife Hilde run the farm together, as an active farm with animals and land, but also as a farm hotel and pilgrim shelter. They have developed it into a place where people can both stay over and get a wonderful 3-course dinner. Guests can be assured they are eating meat raised on the farm, vegetables grown in the garden and fruit harvested from the many trees around them. (photo © Sygard Grytting) 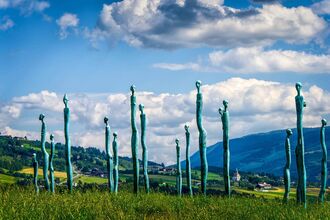 On Sygard Grytting's estate you can find Flokk. Flokk is an art installation from 2011 with 21 tall, narrow figures cast in bronze, with glass eyes. They look out over the Gudbransdal Valley. The artist behind the work is Gitte Dæhlin. (photo © Ian Brodie)