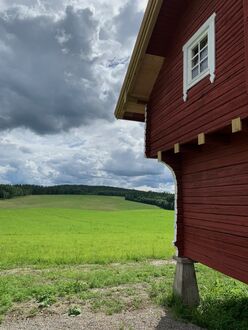 I called one of the route segments “Tour de Stabbur”. The whole segment is one Stabbur after another and the next stabbur was more beautiful than the last. Sometimes they were gone and next you get to see them, one after another. I even encountered a tiny one. In case you're wondering what kind of animal of plant I'm talking about (it does have legs!), then I'll have to disappoint you: it is a storage shed.
This is a traditional Norwegian building, designed for the storage of food. It was made of wood, using the old log cabin technique, and comes in many shapes and sizes. For the most part, it is instantly recognizable. Some of the existing buildings are very old, and some are beautifully crafted. The stabbur typically consisted of one or two floors, and was elevated from the ground, standing on stilts or pillars made of wood or stone. The pillars were shaped in a certain way, often with a wide stone slate on top, preventing mice and other rodents from finding their way in. For the same reason, there would be a gap between the outside stairs and the building itself.
A lot of stabburs are converted into cabins, and there are a lot of them along the St. Olav’s Way where you can stay for the night.

An example of a Stabbur that has been converted into a pilgrims accommodation, Arteid Vestre (no 10. in the guide)