The most spectacular part of the St. Olav’s Way is still Dovrefjell, where the bicycle route goes over a wonderful plane between Hjerkinn and Kongsvoll 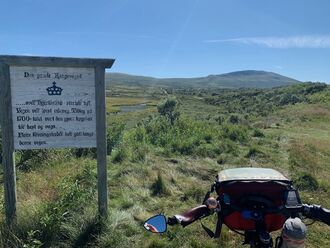 Dovrefjell is the first mountain range in Norway that got it’s own name. Mountains have an important role in the origin-myths in Norway.
The brothers Nor and Gor were conquerors and founders of this country to which it is named: Norge. One conquered the inland and the other the coast. In Dovre they had to resque their sister from the clutches of a giant. The Dovre plane was originally an obstacle on the way to the north. Which ever direction you came from, you always had to travel across this dark, inhospitable, large and often dangerous plane. Nature is rugged and the the area is sparsely populated and snow fall, melting water and avalanches made it hard to travel through it. The weather can change in an instant. In earlier times this area and the rugged nature stood for chaos and dark forces in contrast to the church, which stood for order and security. In the mountains there were trolls, spirits or ghosts and fairies. In Kristin Lavransdatter [link] there is a section which describes this fear of the wild nature. When there finally was a constitution for a independent state in 1814, after centuries of rule under the Danes and the Swedes, the architects said the Norwegians will be united until Dovrefjell would collapse. 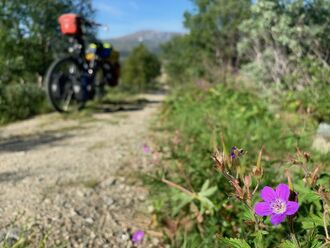 These days Dovrefjell is a wonderful mountain area with remarkable flora and fauna. The Dovrefjell Nasjonalpark was founded in 1974 to protect the indigenous animals and plants. Since 2002 the park was extended considerably is is called the Dovrefjell-Sunndalsfjella Nasjionalpark. There are over 420 plant species with which this area has the most elaborate mountain flora in Northern Europe. Among which is the artemisia, spring pasqueflower ('lady of the snows') and the Artic poppy (Papaver radiactum). For the modern cycling pilgrim, Dovrefjell is more of a enchanting highlight than a inhospitable hurdle that has to be crossed on the way to the north, even though it’s not something you would do with ease. And this exposed area is still dangerous in bad weather like snow, rain or thunderstorms. 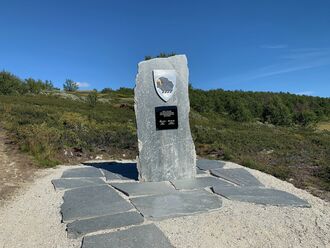 Dombås is a small town and a perfect place from which you can visit Dovrefjell. You can get all the information about it at the informationcenter on the Sentralplassen. You can also apply for activities like muskox or moose safaris.

Have a look on the website of Dovrefjell Adventures.

If you cycle the route northwards, the first few hundred meters, from the start at Hjerkinnstue, are quite tough:

But you will be richly rewarded: