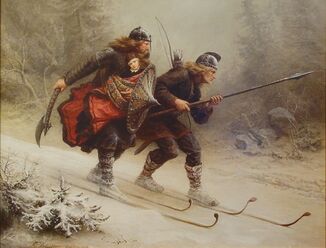 In front of the library of Lillehammer is a statue called “Birkebeiner”.

The statue Birkebeiner tells the tale of Thorstein Skevla and Skjerwald Skrukka, two men who fled with the then two year old crown prince Hågon IV by ski trough the mountains in1206. After an exhausting journey of over twohundred kilometers, they managed to reach safety.

Starting in 1932 a long-distance cross-country ski marathon is held every winter over a part of the route: Birkebeinerrennet (lit. the Birkebeiner race). Every Norwegian has to do it at least once in the persons life. The route stretches over 54 kilometers and starts in Rena and finishes in Lillehammer.
The event is held in classical style from that era and to honor the legendary Thorstein and Skjerwald. All participants carry a backpack weighing at least 3.5 kg, symbolizing the weight of the then one-year-old king The Birkebeiner. It is the most famous and popular Norwegian corss-country ski race held with over ten thousand participants.

“Birkebeiner” are shoes made from the bark of birch for skiers in medieval times. 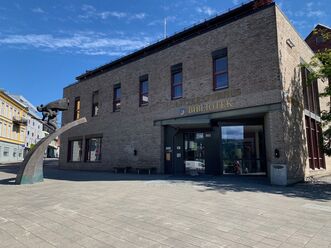 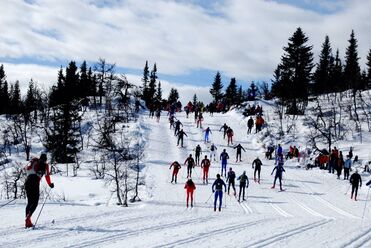