In the footsteps of the Holy Olav 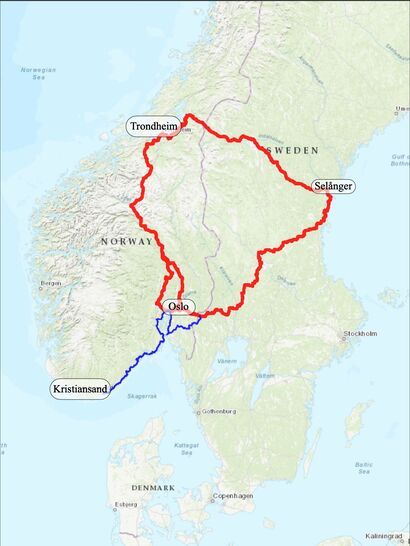 Follow the trail of the holy Olav. A varied cycle route of almost 2000 kilometers long through an ever changing scenery of of the Scandinavian landscape. Cycle towards Oslo from Kristiansand, this Kristians Route is over 400 km.

Trondheim in Norway was in the medieval days just as important destination for pilgrims as Santiago, Rome and Jerusalem. The Pilgrims walked to the grave of the holy Olav in Nidaros, the ancient name of presentday Trondheim. Since a couple of years a number of routes are made accessible again for the modern Pilgrims.

Two of these routes, St. Olavsleden from Selånger (Sweden) to Trondheim (Norway) and the St. Olav’s Way form Oslo to Trondheim (Norway), are adapted for cyclists. These Olav’s routes, together with a transit route, form one large circular, almost two thousand kilometers long bicycle route through Norway and Sweden, In the footsteps of the Holy Olav.

The St. Olav’s Way can be cycled on it’s own. For the other two routes it is a bit different, because Selånger, the starting point of the route of St. Olavsleden, is hard to reach with public transport while bringing your bicycle along.

Cycle this complete route counter clockwise and start in Oslo with On the way to St. Olav. Why counter clockwise? For two reasons: the route is easier because the climbings are less steep and St. Olavsleden from Selånger to Trondheim is well signposted for cyclists in this direction.
Off course you can cycle the route the other way around, but it’s a bit tougher. If you go north with your bicycle by boat or train? Start in Oslo. The city is easiest to reach by public transport.

The three routes that form In the footsteps of the holy Olav are described here independently. For more information about the Kristiansroute: click here.

On the way to St. Olav

A route from Oslo to Selånger which connects both Olav routes. You’ll cycle through the typical Swedish landscape of forests and lakes. A (Dutch) cycling guide is currently being worked on and is expected to be published in late 2022 or early 2023.

A wonderfull ‘coast to coast’ pilgrim cycle route with a length of 580 kilometers from Selånger over the swedisch countryside and the Scandinavian highlands through the Norwegan mountains to Trondheim. This route is fully signposted for cyclists. A cycling guide is currently being worked on. Expected publication (Dutch version): end 2022 or early 2023.

A guide is available for this (independent) route. This guide describes the beautiful bicycle route for pilgrims from Oslo, touching Mjøsa, the largest lake of Norway, through the splendid valley Gudbrandsdal, over the mesmerizing Dovrefjell planes to Trondheim.
As part of In the footsteps of the Holy Olav, it is advisable to cycle it from north to south. You can then start at the back of the guide. In that case, the use of the GPS tracks is recommended.